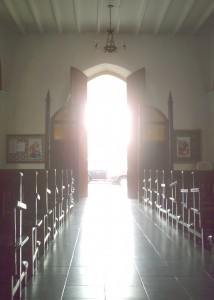 “This season of Lent provided a time in which converts to the faith were prepared for Holy Baptism. It was also a time when those who, because of notorious sins, had been separated from the body of the faithful were reconciled by penitence and forgiveness, and restored to the fellowship of the Church.”

This was a part of the priest’s invitation to Lent at this weeks Ash Wednesday service. The sentence about those with “notorious sins” who had been separated from “the body of the faithful” has been rattling in my mind since the priest read it. I have two reactions. First, I think of some people I know who have given up on anything good they actually had for a few encounters with sin. By encounters with sin I mean, of course, encounters with women. I’m pretty close with some of these guys and I kind of want to throw them off a cliff. And yet, I also feel a deep kind of pain for them. You can see the regret in his eyes. He lives it. Is there a place for him now that he is a “notorious sinner”? He was a Pastor. I wonder how many marriages he helped before he wrecked his own. How many troubled kids did he council before wounding his own? Is there a place in the “body of the faithful” for those who have been unfaithful?

There are other guys who don’t seem to have that much regret. I met a man a couple of weeks ago who was quite famous in Christian circles, at least. He was at least half-drunk when I met him and his new wife who were still leading conferences on ‘authenticity.’ It was really sad. But just the other night Marisa and I were talking to the kids about Edmund from “The Lion, The Witch, and The Wardrobe.” We were explaining how Edmund’s anger towards his siblings was caused by the deeper anger that he had towards himself. Things were a bit more complicated from what they appeared to be on the surface. Aren’t they always? Edmund, we were reminded in our Lenten devotional, was late to the great feast because of one small treat–Turkish Delight. He gave up the banquet for the witches cheap imitation. Soleil wondered if there might have even been turkish delight at the feast. Good question. But here is something we can’t forget: even Edmund ended up at the feast. And I wonder, is there any place in the church for those notorious sinners who may be late in their repentance? The one’s who, on the surface at least, don’t seem quite as broken? As we were reading the scriptures tonight Mark 2:17 jumped out at me:

“It is not the healthy who need a doctor, but the sick. I have not come to call the righteous, but sinners.”

I don’t think we do this very well. Maybe we never have, I suppose. Life is messy. Good people do hurtful things. Terrible things, even. They cause people pain. But don’t they also cause themselves pain? “It is not the healthy who need a doctor…” Are those whose lives are in pain because of their own sin excluded? No. Jesus tells us that it is precisely the sinners, the notorious ones even, that he came to for. How beautiful would it be if we allowed this season to be a time when “those who, because of notorious sins, [who] had been separated from the body of the faithful were reconciled by penitence and forgiveness, and restored to the fellowship of the Church.”

But here’s my second reaction–how faithful is “the body of the faithful?” Is the distinction as clean as we would like it to be? On some days, when all the planets align, I feel like I’m a part of the body of the faithful. But most days I feel more like a notorious sinner. As I’ve gotten older I’ve come to realize that I’m a lot worse of a person than I thought. Time has a way of revealing to you that what you once thought were minor infractions–little sins– were actually habits in the making. We truly are ‘people of habit.’ We used to think that our thoughts determined our actions, but neuroscientists and philosophers alike are now telling us what the prophets have always been trying to tell us, that the opposite is true. Our actions become habits which shapes our thinking. All that to say that as I get older I see sin less as an event, and more as a pattern. It’s less that I got angry, and more that I am angry. So, here are the two conclusions that I have drawn from my discovery that I’m worse that I thought: First, I need Jesus a lot more than I thought I did. Second, I need the body of Christ more than I thought I did. When we look to Jesus during this season we realize that the line between ‘them and us’ is a lot thinner than we would care to admit. I’m reminded of a line in the chorus Sting’s “Tomorrow We’ll See”:

You could be me in another life

In another set of circumstances…”

We don’t want to think that it’s true, but it is. Sara Grove’s wrote:

“I swear it never will happen to me

But how can I know

For Peter swore the same to Thee

So during this season, may God give us a heart for notorious sinners. And may He give them a heart for us too, for one day–have mercy Lord–we may find that it is they who need to welcome us.