Putting Jesus (back) In His Place

Phil Aud
No Comments on Putting Jesus (back) In His Place
7 min read
“‘Welcome to the real world’ she said to me, condescendingly. ‘Take a seat…”
-John MayerWe undoubtably live in troubling times. Terrorist attacks are increasing in the West. We now have to wonder if it is safe to attend concerts, sporting events, or even run in Marathons. And while we may not live with the constant threat that other nations have to deal with, we are dealing with very real and increasing threats. To make matters worse, the threats come not only from the outside, they come from within our borders as well. This year alone there have been more than sixty documented gun incidents in our US schools. Because of our technological advances, we are witnessing heinous hate crimes being committed by terrorist groups like ISIS. We are painfully aware that people are being beheaded, and even little children are being brutally killed at the hands of violent men. In the midst of all of this there are a multitude of Syrian refugees who are asking for a safe place to land as they flee their home. In the face of such violence, what are we to do? Is it safe to welcome these strangers here? What should we do given the violence that is all around us? It at this point that I am troubled, because I hear many Christians saying that we should close our borders, carry a gun, and be ready to shoot dead anyone who threatens our lives. Now, I’m not saying I don’t understand the sentiment, it’s just that if you are a Christian, the pesky words of Jesus seem to get in the way.

“You have heard that it was said, ‘An eye for an eye and a tooth for a tooth.’ “But I tell you not to resist an evil person. But whoever slaps you on your right cheek, turn the other to him also…“You have heard that it was said, ‘You shall love your neighbor and hate your enemy.’ “But I say to you, love your enemy, bless those who curse you, do good to those who hate you, and pray for those who persecute you, that you may be sons of your Father in heaven…“For if you love those who love you, what reward have you…Therefore you shall be perfect, just as your Father in heaven is perfect.” (Mathew 5:38-39; 43-45a; 48).

“Then He [Jesus] will say to those on his left hand, ‘Depart from Me, you cursed, into the everlasting fire prepared for the devil and his angels:
‘for I was hungry and you gave Me no food; I was thirsty and you have given Me no drink; I was a stranger and you did not take Me in, naked and you did not clothe Me, sick and in prison and you did not visit Me.’
“Then they also will answer Him, saying, ‘Lord, when did we see You hungry, or thirsty or a stranger or naked or sick or in prison, and not minister to You?’
Then He will answer them, saying, ‘Assuredly, I say to you, inasmuch as you did not do it to one of the least of these, you did not do it to Me.’
“And these will go away into everlasting punishment, but the righteous into eternal life.”

Now it’s at this point that John Mayer’s teacher usually appears and let’s me know that Jesus ‘spiritual words’ are fine and good, but we are talking about the “real world,” with real terrorist attacks, real beheadings, and the real slaughtering of children.” “Take a seat” she seems to say. And it’s at this point that I think we need to put Jesus back in His place. And what is that place? It’s first century Palestine.

Paul writes “But when the fullness of the time had come, God sent forth His son, born of a woman…”. It would seem that God chose a precise time to enter into history in the Person of Jesus of Nazareth. And here we are in the season of Advent remembering how God sent His Son, born of a woman, into our world. But what world, specifically, did Jesus enter? There is a part of the Christmas story that we usually don’t get our kids to act out. Even though the Magi make an appearance, we avoid scripting in our plays the part about them deceiving Herod and how “Herod, when he saw that he was deceived by the wise men, was exceedingly angry: and he sent forth and put to death all the male children who were in Bethlehem and in all its districts, from two years old and under, according to the time which he had determined from the wise men.” (Matthew 2:16)

Herod was a raving maniac who slaughtered little boys in an attempt to put Jesus to death. He was so violent that he put many of his own family members to death. Caesar Augustus is reported to have said, “I would rather be Herod’s pig than his son.” 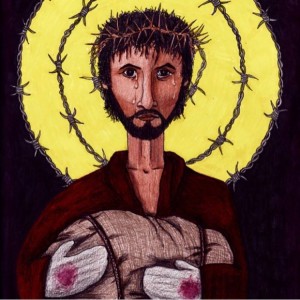 This is the world that Jesus was born into. His family had to flee as refugees into Egypt to escape death in their own land. They eventually returned home. Israel, at this point in history, was being ruled and oppressed by the Romans. Although the people lived in their own land, they did so under the constant threat of the Roman authorities. It was an extremely violent point in history. The one who prepared the way for Jesus–John the Baptist–was beheaded, and his head was brought in on a platter at a party. While we know that Jesus was crucified, it is important to realize that He was not the only one. Some believe that as many as two thousand people were crucified on a single day. Jesus would eventually end up beaten to a pulp, and crucified. Almost all of his disciples died brutal deaths at the hands of violent men for being his followers.

At this point some will say, ‘yes, but these people died for spiritual reasons. They were martyrs.’ Yes…but also, no. It is true that they were martyrs. But ‘religious life’ was not so easy categorized in the first century either for polytheists or monotheists. Religion was not something that you simply did in a private sphere – it impacted and entwined with the rest of life. Why else would Jesus have been seen as such a threat to the political leaders of His time? Jesus cannot simply be written off into the personal and private areas of our religious life.

All of that to say that when we read Jesus’ words, we must read them historically. It is an offense to the gospel to treat Jesus like some armchair theologian. Jesus was and is “God of God, Light of Light, Very God of Very God.” This is, as Christians, our confession. And as Christians we must understand that Jesus’ teaching of non-retaliation and enemy-blessing (not to mention stranger-welcoming) did not take place in a vacuum. They were spoken while people were being crucified and beheaded. They were, in fact, spoken and enacted while He was being crucified.

Now, I’m not saying that you have to like what He said. I’m just saying that Jesus’ words must not be written off during times of violence, since it was precisely during times of violence that they were spoken. We must understand that for a Christian, Jesus’ Way not only applies in the ‘real world,’ it is the real world. We must not settle for less. As Pedro Trigo once said, “I cannot assign the name reality to what my faith tells me is a distortion of reality.” Neither should we. Jesus is still Lord.

Jesus, Non-Violence, and Revelation Part I