Phil Aud
No Comments on Review: The Lost World of Genesis One (Walton)
3 min read 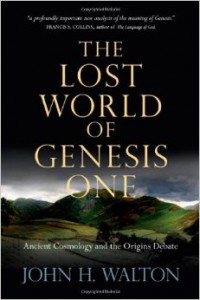 I’m glad to have finally read this book. I’d seen it referenced in several places and was happy to read Walton’s arguments. His premise that the ontology of Genesis 1 is functional rather than material (in other words, about the purpose of creation and not physical material of creation) is not only a compelling intellectual argument but an important message for the church today. To echo Walton’s question, how many young adults have (unnecessarily) left the faith when they were confronted with science that ‘contradicted’ their faith. Walton contends that there is no contradiction since science and faith serve two different purposes – science dealing with material origins, Genesis dealing with functional origins. But his conclusion does not just challenge our biblical understanding but is a challenge to the way that creation theories are presenter by public educators. For both of these reasons I think this is an important for both youth and young adult pastors to have in their library. It should probably be noted here that while the book speaks of ontology and other technical terms, the author does a great job of breaking the material down in a very accessible way. I’m always grateful when authors who have important work make that work available to those who are not necessarily in their field of study.

I was surprised by how short the sections on biblical cosmology as temple liturgy were since this is what I have seen referenced the most in other works, but it too was compelling. The implications on Sabbath under became immediately apparent.

My one critique of the book is an overemphasis on human creation to the exclusion of the function of the rest of God’s creatures. ‘Dirt’ plays a prominent role in Genesis but seems to be underemphasized here. While the Divine Image certainly sets humanity apart, the material from which human beings are created (a common theme amongst the ancient creation documents) is also the same material used to form animals and birds, for example. A functional reading should not ignore this commonality, yet it feels glossed over. Walton writes, “An individual named Adam is not the only human being made of the dust of the earth, for as Genesis 3:19 indicates, ‘Dust you are and to dust you will return.’ This is true of all humans, men and women. It is an archetypal feature that describes us all” (69). It also describes much of the rest of creation. Even when our connection is mentioned, “Humankind is connected to the ground from which we are drawn…” (70) the author moves immediately to the exclusive function of humanity. It is, of course(!), important to understand our unique role in creation, but the commonality of creatureliness need not be de-emphasized. I was also interested that the author said that “we can say that humanity is the climax of the creation account” due to creation not being “set  up for the benefit of God but for the benefit of humanity.” According to a functional reading, wouldn’t the Sabbath be the climax?

Despite the above (minor) critique, the book was overall an incredible work. I am grateful for Walton’s work which has certainly shaped my thinking and, I am certain, will shape the origins conversation for years to come.

4 Rules For Respectful Dialogue with the Religious "Other"