Review: From Nothing (McFarland)

Phil Aud
No Comments on Review: From Nothing (McFarland)
3 min read

McFarland’s “From Nothing” is a robust theology of creation with it’s focus on the doctrine of creatio ex nihilo (creation from nothing) and it’s important implication for how we understand theology and the world which we share with the rest of God’s creation. The introduction provides a fantastic overview of how the doctrine came to be. Here the author explores the doctrines defense by two very different theologians: Basilides (who was a gnostic), and Theophilus (who was not). The difference in their understanding is crucial. Basilides believed that God was not intimately involved in the creating of the world, but rather created a “seed” from which the world, “of its own accord, without any divine stimulus or intervention” (8) emerged. This allowed God distance from the matter which, according to Platonic thought, was evil. Theophilus, on the other hand, believed that God was directly involved with the creation of the world. McFarland explores not only the opponents of the doctrine in the early church but in our day as well (primarily among process theologians).

As the author’s theology unfolds you will find a rich Trinitarian theology that shapes every angle of his tightly woven thesis. McFarland (who is a professor at Emory) is obviously deeply rooted in the Patristic’s and seems, in particular, to have regular interaction with Aquinas. The first section of the book explores the three elements of the doctrine by chapter: 1. God; 2. Creates; 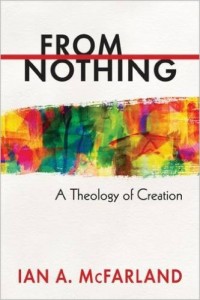 3. From Nothing. Here we find the great distinctions between the unknowable God who makes Himself know, and His creatures. We also find the great similarities between creatures, in particular our similarity in being created. Our creation is not, however, from a God who is removed from His creation (as Basilides proposed), but is the outcome of Trinitarian love. One of the implications, according to the author, is that humans are not “ontologically closer” to God than any other creature, rather, our distinction is our function (drawing heavily from Maximus the Confessor at this point).

For those concerned with God seeming tyrannical (not least process theologians), McFarland explicates on the understanding of power from (again) a Trinitarian perspective. “Divine power is not something that needs to be taken or hoarded, which is how we fallen and finite creatures tend to conceive of power; rather, it is exercised in giving. God is supremely powerful as the one who bestows power” (96, 97).

In the second section of the book the author explores potential theological challenges that ex nihilo might present to the reader and carefully walks through each of them. In the final chapter he speaks of “glory” and writes, in particular, on icons and eucharist.

“From Nothing” is very dense book but is certainly worth the time and effort if you are interested in the theology of creation. Different from many books on the topic, it is very much a Christian perspective (rooted in John rather than Genesis, for example), and provides a wonderful Trinitarian framework.