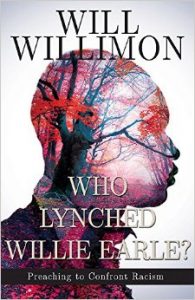 This is a small book, only 132 pages long, but as I read it I knew I was holding something weighty. Who Lynched Willie Earle? is, like the sermon from which the title was taken, a bold book. Will Willimon is a Duke professor and a retired bishop of the North Alabama conference of the United Methodist Church. He’s also a white southerner. The prelude to the book begins with Willimon recalling a defining moment he had as a college aged student seeking advice regarding his academic future. He stood in Dr. Jones’s office asking for help with his academic future when he first learned about the lynching of a young man named Willie Earle. This lynching, he came to understand, took place in his own community. Willimon writes, “Thus began my life with the dead: Willie Earle, who was lynched; Hawley Lynn, the Pickens preacher who spoke up; the Greenvillians who murdered him; the Greenvillians who acquitted the killers; and those who tried to forget–until God made me a preacher.”

There is a danger in a white man writing a book on racism. Willimon acknowledges this early on writing “copious annotation of sources, mostly from African American writers, is my attempt to make this book more than ‘the white gaze’ –in which a white scholar presumes to speak of African Americans without listening to African Americans speak” (Xiii). There is also a danger in a white man not talking about racism. One of the biggest race problems in America is our (white) refusal to believe that there is a race problem. This is becoming harder to ignore though. Willimon writes that “our racial history is like toxic waste: we attempt to cover it up, deny it, but then it bubbles up or gives off its stench and we are forced to admit its toxicity” (Xiii).”

In the first chapter Willimon gives both the proud admission of the lynching by Jessie Lee Sammons and the painful testimony of Willies’ mother, Tessie Earle. In the second chapter we are introduced to the author of the sermon, Hawley Lynn, Pastor of Grace Methodist Church, and are given the details of what led up to the sermon. Chapter three is the bold sermon itself. Interestingly, Willimon praises Lynn’s sermon, but not without critique. He writes that “while Hawley boldly named outright legislated Southern racism, his sermon might (unintentionally) have given fuel to genteel, educated whites who wanted to depict the whole affair as precipitated by the eternal victim, a deed done exclusively by uncouth, uneducated ‘them (52).’” And yet he writes “still, in the context of the time, his sermon was heroic homiletics (48-49).” He speaks of sermons given in our own time too, but is also unafraid to critique those, including one given by John Piper which he ends up describing as the type of “‘reconciliation’ white folks love to hear [about]” (109).

I am astounded by, and grateful for, the boldness of this book. I’m sure that many won’t make it past a few pages and will give it a one star review given that Willimon makes statements like this: “South Carolinian Dylan Roof, who committed the massacre at Mother Emmanuel, was neither insane nor original in his murderous racism. He was a product of a culture and a history unwilling to shake off some deadly ideas” (56, 57). But these things need to be said. Willimon further confronts the idea that racism doesn’t exist if we don’t feel like it’s there. He talks here both about the blind nature of white privilege, but also about racism as much more (though not less) than a person problem; it is a systemic and institutional problem in which we live and are trained. His statistics are mighty hard to ignore. He therefore presents the challenge as a “move from being non racist to being actively antiracist” (95).

In the midst of all of this Willimon calls for strong biblical preaching. He reminds us that when a bombing or church burning took place, “Martin Luther King Jr. would show up with his entourage, dressed in a black suit and white shirt, clutching his KJV Bible to give, not a press conference, but rather a sermon” (92). We pastors must follow King with the sermon, as Willimon frequently says, as our “weapon of choice.” He reminds us that must also pastor the people to whom we preach (117), and finally that we must join with our African American brothers and sisters in relationship and ministry. But there is a warning here too: “when we whites join with African Americans on some project, we must be sure that we serve as participants, not as leaders” (119).

This is such an important book and should, in my ‘humble but accurate opinion,’ be mandatory reading for anyone wanting to enter ministry in the United States. There is too much at stake to ignore people like Willimon and the plethora of authors he references throughout the book. I am grateful for this prophetic book and will be widely recommending it.