A Deeper Look Into The “What If’s” 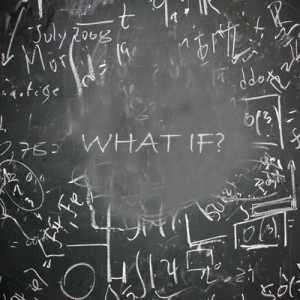 For many people, there is often a nagging sense that our lives were meant for more, and that our current state of existence is somehow less than we hoped for. Not everyone would verbalize this, some would even try to avoid these feelings, but it seems to be a common struggle. It probably hasn’t helped that we tell our kids that they can do and be anything they want if they just try hard enough. Of course, even if they all try with all of their might, there is only one President in the US at a time. There is only one Lebron James, or Michael Jordan. Only Steve Jobs. For that matter, there was only one Mother Theresa. Many do similar work to her, but most are unnoticed and don’t have the public influence that she had. Many people, then, who think they are going to grow up to “change the world,” find themselves as adults who are frustrated because their day ends in exhaustion not from feeding the poor, or strutting their stuff on the court, but in doing laundry and lunches.

The questions that nags them is, “Isn’t there more than this.” This question is often followed by another question, or questions, that start with the two words: “What if.”

“What if I had chosen a different career path?”

“What if I wasn’t married?”

“What if I was married?”

“What if I had gone to that school?”

“What if I had taken few years off before going back to school?”

The questions are different in their particularities, but are all after the same thing. They are attempts to imagine how our lives would have been if we had chosen a different path at a given time. The truth about these “what if” questions is that they are not rooted in reality. They are our attempts at fiction. Perhaps we all wanted to be writers. The irony, of course, is that we think  know how everything would turn out if we had chosen a different path. But we don’t. We often think that there would have been a pot gold waiting for us instead of a dirty pot that needed to be cleaned, but maybe not. Still, it’s true things could have turned out the way we wanted. But what if that is problematic, too?

Cynthia Heimel wrote an article about the people she saw who became famous. She had seen them when they were doing “everyday” jobs before they made it big. An amazing thing happened, when they became famous, they became miserable. She writes:

“I pity [celebrities]. No, I do. [Celebrities] were once perfectly pleasant human beings…but now…their wrath is awful…More than any of us, they wanted fame. They worked, they pushed…The morning after…each of them became famous, they wanted to take an overdose…because that giant thing they were striving for, that fame thing that was going to make everything okay, that was going to make their lives bearable, that was going to provide them with personal fulfillment and…happiness, had happened. And nothing changed. They were still them. The disillusionment turned them howling and insufferable.”

“I think when God wants to play a really rotten practical joke on you, he grants your deepest wish.”*

All of the great spiritual writers throughout the ages would ask us to dwell on that first question: “Isn’t there more than this.” They would all give a resounding “yes.”

“You have made us for yourself, and our hearts are restless till they find their rest in you.”

All of these “what if” questions are simply signs of a restless heart. We were made that way. Greg Boyd recalls a sermon by Jonathan Edwards in which Edwards spoke about how deep and wide the love and joy of the trinity is, so much so that it “simply could not be contained…So this fulness overflowed, as it were, as God brought forth a creation that mirrored his triune beauty…It’s a beautiful arrangement. The God of overflowing love longs to pour his love into others, so he creates beings that long for his love to be poured into them.”

So my suggestion is that we stop brushing past our what if questions, and stop trying to avoid them. Instead, let’s look deeply at these questions until we begin to see through them to the deeper ‘what if’ questions.

“What if my soul is trying to tell me something?”

“What if this feeling of dissatisfaction is actually coming from God?”

“What if the vision of what I want isn’t too big, but too small?”

“What if a ‘full’ life is still possible?

In Mark chapter 2 there is a story of a paralytic man who was carried to Jesus by his friends. The man wanted to walk. But when Jesus see’s the man he says,

“Son, your sins are forgiven.”

Tim Keller notices the discrepancy between what the man wanted and what Jesus initially gave him. But Keller writes that what we think we want is often different from what we actually need. Our restlessness, in other words, is often deceptive. What if the man had been healed, but it didn’t bring him the real wholeness that he sought. Keller concludes,

“Jesus is not going to play the rotten practical joke of giving you your deepest wish–until he has shown you that it was for him all along.”

What if this true not only of the paralytic man, but of you and I as well?

*This story is found in Tim Kellers “Jesus The King”.

A Book On Justice Where Philosophy, The Arts, And The Academy Meet