This was a really interesting book. Like many my age, I grew up watching Mr. Rogers lace his shoes and talk gently in the land of “Make Belief.” What I didn’t realize at the time was how strong of a pacifist Mr. Rogers actually was. As Long writes, “In a very real sense, we’ve domesticated Fred Rogers and his radical pacifism. We’ve restricted him to the realm of entertainment, children, and feelings, and we’ve ripped him out of his political and religious context.” After reading this insightful book, I would agree. Long takes us on a historical journey through both major historical moments in the United State’s history, and episodes of “Mr. Rogers.” It is fascinating to see how Rogers used his shows to instill the message of non-violence in children, even quoting scripture (Isaiah 2:4) on air. He often countered the politicians rhetoric with puppets in the land of make belief. He did this, for example, at the heigh of Reagan’s “evil empire speech” in 1983 during the show’s “War and Peace” week (now titled “conflict week”). 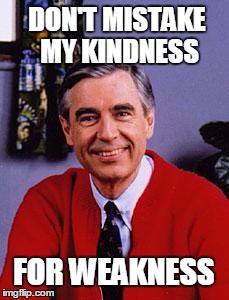 Rogers was not the type to march in streets, or hold protest signs. As the author writes, “As a Christian peacemaker, Rogers took his cues from the parables of Jesus….behind the staring eye of a camera, and on a set built for sharing stories about the peaceable reign of God.” What a fascinating man.
I did find the book itself got off task towards the end (though the conclusion was great) and I found myself wanting the author delve a little more into what shaped Rogers’ thinking regarding “non-violence,” theologically, for example. He did this to a certain extent, but would have loved to have seen this developed further instead of trying to delve into other topics. Certainly many conservatives will feel taken aback by Rogers’ liberal theology, as portrayed by Long. Somewhere along in the reading it felt like I stopped reading a well researched book about Mr. Rogers and started reading Mr. Long’s agenda. If one can see past this, there are some things to be gleaned from this book. In particular, I left the book remembering that it is not only the “in your face” personality that can help bring change, but also (especially?) the gentle souls of the world. In the end, I give this book a 3 stars.
*I received an advanced copy of this from Netgalley