Book Review: Shane Hipps’ “Selling Water By The River” (A Book About The Life Jesus Promised And The Religion That Gets In The Way”

Phil Aud
No Comments on Book Review: Shane Hipps’ “Selling Water By The River” (A Book About The Life Jesus Promised And The Religion That Gets In The Way”
5 min read 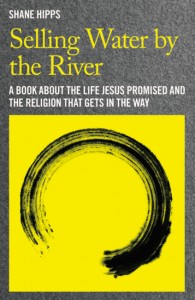 Shane brilliantly uses metaphor. This book is packed full of metaphor all of which are his own. There are no end notes and no bibliography. These are Shane’s thoughts on scripture. I found many of these metaphors to be stunning and well thought through.

I have seen the typical ugly reactions to Shane’s promo video online. While I wasn’t a fan of his promo video (at all), I think it brings up an important point that Hipps makes regarding the lenses through which we view the Bible. “The most limited Bible interpreter is one who claims to have no lens” (p. 19). I believe that we can begin to have better dialogue and disagreement when we being to look at some of the lenses through which we read the scriptures. (None of us, of course, understand our lenses completely). “Over the years I have found most of the debates about Bible, doctrine, theology, and religion are not actually debates about what the Bible says. They are in fact debates informed by competing unconscious lenses” (p. 28). Agreed.

All of that being said, I was disappointed with this book. After having read “The Hidden Power of Electronic Culture” I was excited for the release of this book. In “The Hidden Power” Hipps, in compelling detail, delivers what he promises. I left this book wondering, “how is it that religion is getting in the way again?” Religion get’s in the way – that’s a bold (albeit popular) statement. But how? He deals with the river metaphor but, in my opinion, religion doesn’t get much attention. Some would argue this point with me I’m sure but tradition and institution don’t necessarily equate religion(s). Nor are lenses merely religious. Perhaps a definition of what Hipps means by “religion” would help. I also wish that the book would have more tension in it. Don’t get me wrong, I think it will create tension to people who approach the scriptures with a different set of lenses, which is a good thing, even if it’s purpose is to make people think more deeply about why they believe what they believe. Yet, the book often fails to live in the tension that we find in the scriptures. ‘The river is within you’ – yes, Jesus says that. But John also records Jesus as saying that He (He actually says “we”) will dwell in people who “keep my word”. The implication is that He doesn’t dwell in people that don’t. In his chapter “A Connoisseur Of Wine” Hipps talks about the women at the well and says, “We might expect Jesus to say something like ‘Repent of your sin and believe in me and you will have that water.’ But he doesn’t say this…He doesn’t call it sin, nor does he tell her to change the way she is living” (p. 143). True. However, John  (chapter 8) also records Jesus as saying “Go and sin no more” to the women caught in adultery. John hold’s the tension, I wish Hipps would too. Speaking of “Christian institutions” he says, “through time, repetition makes any song, no matter how beautiful, lose its edge and interest…Familiarity breed predictability, and this leads to boredom” (p. 11). Actually, what is unique to the medium of music is exactly – repetition! Why does repetition work in music? Because of tension and release. The notes may stay the same but they will be understood differently, even if they remain identical, because of their placement within the various tension and release events that happen within the progression of the  song (see Jeremy Begbie’s “Theology, Music and Time”). The repetition (think church tradition) does not necessarily indicate boredom. The limits and constraints of religion can actually produce freedom. Any real understanding of improvised music will shed light on this (Again, see Begbie). And the tension (which I would like to see more of) is what makes music interesting. Further, there are certain statements made within the book that were confusing such as, “The first commandment is, “You shall have no other gods before me.” Notice this is about sequence, getting the order right. God doesn’t say you shall have no other God’s – period” (p. 160). What? This doesn’t square well with the book (Exodus) that he is quoting from (see especially 6:4), or with the religion(s) “that gets in the way”.

To conclude, I would like to mention Shane’s chapter on fear – “Touching The Stove”. I don’t agree with everything that he writes but I think that people should approach books that they don’t wholeheartedly embrace – without fear. I don’t think this is Hipps’ best writing, and I have a different set of lenses and disagree with some of his thoughts, but there are still things to be learned from his writing.

What Is Advent And Why Does It Matter

A Tale of Two Coins (by Tim Gavigan)