Ever wonder where the alphabet came from? How about the fact that some people write from left to right while others write from right to left? If I were a bettin’ man, I’d say you probably don’t spend a lot of your time wondering about these things. The reason is simple: writing is something that we do, for the most part, without thinking. Of course, when we first learn to write we think about it all the time. When you start, learning to use a pencil is like learning to eat with chopsticks. Eventually, though, like so many other things in life, writing becomes intuitive. There was once a study released from Duke University that claimed that about 40% of what we do everyday is not based in decision but habit.⁠1 Writing would fall in the habit category. We think about what to write, just not the writing itself. In other words, we don’t think through every step like we did when we first learned; we just pick up a pen and do it. But what if this daily activity, the one we don’t really think about, changes the way that we think about the world? What if, for example, writing from right to left makes you think about things differently than if you wrote from left to right?⁠2 These next few posts are about that. We’re going to spend a bit of time on this topic and we’ll eventually get around to seeing how this impacts our Bible reading and why it matters. But for now, let’s start with this question:

Where did the alphabet come from?

Proto-Sinaitic. That’s the name of the first known alphabet. This Proto-Sinaitic alphabet probably emerged somewhere around 1800 BC. Even if you’re a young earth kind of person, that means that people existed a really long time without writing things down. The alphabet was a game changer. Still, we didn’t know that much about the origin of the alphabet until 1905 when an archeologist name Flinders Petrie discovered several markings in the Sinai desert.⁠3 Sinai, of course, makes a lot of appearances in the Torah (first five books of the Hebrew Bible). Amazingly, Petrie believed that the markings that he found in the desert were the work of a people known as the Hebrews who were, at the time the writing, enslaved by Pharaoh. You can read about their enslavement and eventual freedom from slavery in the book of Exodus.

I took a few semesters of Hebrew in college. Naturally, the first thing I learned was the alphabet. It quickly became apparent that if you put together the first two letters of the Hebrew alphabet, aleph and bet, you get our English word alphabet. So obviously, our alphabet is named after the Hebrew one. It’s kind of a tribute. When you study Hebrew though, you quickly realize that it is a very different type of alphabet and very different type of language from ours. There are two really big differences. The first, and the one we’re going to deal with in this post, is that Hebrew has no vowels.

It’s hard to imagine not having vowels to work with, right? The main image for this post is an English sentence with no vowels.⁠4 It’s particularly strange if you think about yourself as a kid trying to learn how to read and write without the vowels. How would you do it? The truth is, you’d have to think differently. The way you would interact with words would have to change drastically. Think, for moment, about how we learn to read. In a sense, we dissect words. What I mean is that we break words down to their smallest parts (letters) and then we sequentially put those letters back together again to sound out the word. On top of this, we have rules that govern how we sound out the letters. If there are two vowels, for example, the second vowel gives strength to the first. There are a lot of steps in learning how to pronounce a single English word.

Hebrew is different, though.⁠5 You don’t dissect Hebrew words. Instead, you learn to see them whole.⁠6 Recently in the West, we have made an interesting move towards this type of writing with our texting shortcuts. For example, nvm is now the shorthand way of writing never mind, or, in French, svp is short for s’il vous plait. It will be interesting to see how this change effects our thinking longterm. But perhaps an even greater similarity with Hebrew exists when we look at our branding. We have become accustomed to looking at symbols and knowing what they stand for.⁠7 If you look at the following you will probably know many of the words that these letters/symbols represent. 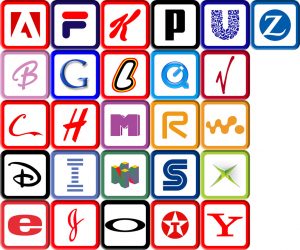 Notice that you are not dissecting. There is nothing to break down. You look at the block and know (or not), through recognition, what each letter stands for. Hebrew is similar. The words paints a picture that doesn’t need to be broken down and put back together. You recognize it as a whole. This brings us to the second question I want to address in this post:

Is reading a left-brain or right-brain activity? 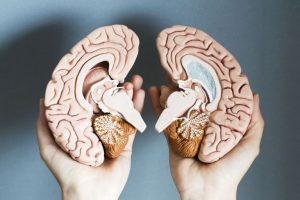 Rabbi Jonathan Sacks, the former Chief Rabbi of the United Hebrew Congregation of the Commonwealth, makes a compelling case that, well, it depends. Look carefully at how he describes the two different types of brain activity.

“The left hemisphere tends to be linear, analytical, atomistic and mechanical. It breaks things down into their component parts and deals with them in a linear, sequential way. The right brain tends to be integrative and holistic. As in E. M. Forster’s prose, it sees things steadily and sees them whole. It gives an overview of a situation while the left hemisphere focuses its attention on specific details.”⁠8

Let’s quickly review the two languages again. In English we learn to read by breaking down the word into its smallest “component parts” (letters), and put them back together in a “linear, sequential way.” But to read Hebrew, a language without vowels, the reader necessarily looks at words and “sees them whole.” Is it possible that reading English is a left brain activity while reading Hebrew is a right brain activity? Rabbi Sacks thinks so. His case becomes even more compelling when we look at the question we’ll address in the next post:

Does the direction you read effect how you think?

*Left brain/Right brain image source: Dimitri Otis/The Image Bank/Gett images
1 John Ortberg, Soul Keeping p. 150
2 Rabbi Jonathan Sacks, The Great Partnership pp. 42-43
3 ibid 42
4 Regarding this image: With the vowels it would read “Language doesn’t work without vowels.” The truth, of course, is that English doesn’t work without vowels.
5 As are other languages like Chinese, for example.
6 It is true that Jewish children now learn to read by using vowels. Still, these vowels are represented by symbols not letters. Further, in ancient Hebrew vowels were non-existent.
7 I first learned of this from Shane Hipps…somewhere.
8 Sack, The Great Partnership p. 41