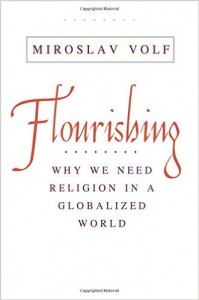 This is a fascinating book by Volf on globalization and religion. Does religion play a positive role in globalization? Is it possible for multiple religions to contribute for the common good (political pluralism) while holding tight to their religious beliefs (religious exclusivism)? These are the types of questions that Volf takes up in Flourishing. He has written from a strictly Christian perspective in another work (A Public Faith) but here tries to write more broadly by appealing to the worlds major religions – Buddhism, Hinduism, Confucianism, Judaism, Christianity, and Islam (though recognizing other religions as important to the conversation as well).

Early on he makes a strong case that religions are not, by their nature, opposed to globalization, but rather are a major contributing (early) force. For Christians, the “great commission” serves as a great reminder of this. However, the global market is now the primary shaper of globalization. For this reason, religion becomes extremely important in pushing and challenging the “moral character of the market” by it’s vision of the good life, or – human flourishing. Drawing from several sources, he does a great job of portraying the ways in which various religious forces help shape the market for the good.

But can these religions do this together? This is such an important question to ask in our times. Volf’s writings on the topic  are more philosophically and sociologically driven than theologically. I had wished for more theology in this book (as in Rabbi Jonathan Sack’s Not In My Name), but it was still very engaging. I felt chapter 3 was wonderfully written. His writings on the “golden rule” and witness, or his ‘rules’ (my term) of respect for dealing with other religions were fantastic. However, I found the fourth chapter less compelling. Here he makes his case (against Popper and Rousseau) that religious exclusivism and political pluralism are not incompatible. He draws practically from the example of Roger Williams (sixteenth-century) and in our times…the “Christian Right.” “Important for my purposes here” writes Volf “is that religious exclusivism of the Christian Right does not prevent it from participating in the democratic process in a way that unquestionably displays the virtues of pluralistic democracy.” But does it remain exclusively ‘Christian’ while doing so? I’m not so sure. What I don’t see Volf doing is engaging religion as it’s own ‘politic.’ Can Christianity, for example, contribute to a pluralistic democracy while believing in the “Politics of Jesus” (to use Yoder’s term). I was unclear as to how this played out. Volf later claims that “the single most significant factor determining whether a religion will be implicated in violence is this: the level of its identification with a political project and its entanglement with the agents striving to realize that project. The more identified a religion is with these, the more likely it will be for even the most peaceful religion to ‘take up the gun’” (p. 189). I agree. Overall, I believe that Volf means (as stated early on in the book) that religions can and should help shape the force and market of globalization with their common beliefs (while not letting go of their differences), but how this actually plays out within politics – and if religions have their own politic – is what I felt needed further clarification.

His final chapter dealing with “Conflict, Violence, and Reconciliation” was – as could be expected – superb (as was his epilogue). Overall the book was quite compelling. I am grateful to the voices which remain strong within their various traditions who yet recognize the importance of writing of our commonality (love of other, for example) in these turbulent times. 4 Stars.