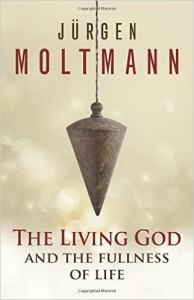 Another theme that takes up much of the first quarter of the book (and is revisited at the end) is the “openness of God” (though Moltmann never refers to it as such). He writes compellingly that “The biblical experience of God would correspond to a ‘self-moved Mover’ rather than to an ‘unmoved Mover.’

I do have two critiques of the book. First, at the outset Moltmann writes that he “tried to write comprehensibly for theologians and nontheolgians and had in view both those who enjoy thinking theologically and those who have not yet tried to do so.” Mission not accomplished. The first 30% of the book was very dense (though it eases up, somewhat, after that). I think that most who have not read a fair amount of theology or philosophy might put the book down early on. The material was well worth wading through but the author could have/should have spent more time writing these thoughts in a more accessible way. The second critique I have has to do with certain assumptions that the author has taken. One reviewer humbly stated that he wasn’t a “theological scholar” and hadn’t studied all of Moltmann’s work, and continued his review with these disclaimers. I saw this as a weakness of the book, not the reviewer. There were a few times throughout the book where I felt a bit lost. However, I started realizing (while checking the endnotes) that Moltmann was expounding on his previous work. I felt this particularly on some of his Trinitarian work. In fairness, after finishing the book I reread the introduction where Moltmann stated, “I have taken up ideas that I already expressed earlier and have developed them further. I have gathered together previous experiences and insights about the fullness of life, and am setting them in the new context of this book.” This is fair, however, it is difficult for those who are “nontheologians” to whom the book was, at least partially, directed.

Overall the book was dense but fantastic. The endnotes do help one to know where to further explore Moltmann’s particular thoughts, so in that way it is a good place to start.