“Living With Other Creatures” (Bauckham): Review

Phil Aud
No Comments on “Living With Other Creatures” (Bauckham): Review
3 min read

This book was a mixed bag for me. It started off good in chapter 1 by claiming that we must focus on all of scripture if we are to understand what it means to dwell as one of God’s creatures here on earth, and that we must think theologically not just in our vertical relationship, but our horizontal relations as well. There is great material on Genesis 2 that is presented here dwelling primarily on our connectedness with the rest of creation. Hierarchy/kingship gets good treatment and is presented as brotherhood/sisterhood among, rather than an authoritarian relationship over creation. For Bauckham (reflecting here on Job), a human is “a creature among other creatures and in a cosmos that has its own meaning and value independently of us.” This understanding becomes clear as we look at creation, independent of us, as worshipping it’s Creator.

Chapter 2 was a great analysis of the Christian understanding of dominion throughout history. This chapter is a challenge to Lynn White’s influential 1967 article “The Historical Roots of Our Ecologic Crisis.” Bauckham here writes on an often ignored part of the ecological understand in Christian history: the 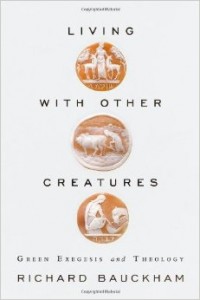 hermits. How quick we are to forget the Desert Mothers and Fathers, the Celtic saints, and the Franciscan’s, for example. Bauckham also challenges the dangerous thoughts put forth by Frances Bacon and René Descartes. This was a very informative section and was well balanced in acknowledging ways in which Christian tradition has, at times, led to dangerous anthropocentric thinking instead of a proper theocentric position (as in the aforementioned saints).

Chapter 3 is where things took a turn for me. There is some very interesting material here on ecology in the Synoptic gospels, particularly dealing with Mark 1:13. But this material is visited, sometimes verbatim, three times in the book. Chapter 5 is the most detailed exegesis of the text, but much of it is repeated material. The chapters are based on various lectures that Bauckham has given and it becomes clear that there is an overlap in material which makes the reading a bit cumbersome. Still, there is good worked to be gleaned from here  as with his subsequent chapter on the sermon on the mount.

The end chapters in the book deal with the topic of “creation’s praise” in heaven and focus heavily on Revelation 4. While there is a strong exegesis of the text, I am not convinced by Bauckham’s claim that it is arrogant to think of humanity in a priestly role. There is zero engagement here with the work of John Walton, for example, in his presentation of the earth as temple with humanity serving as it’s priests. Neither is the “kingdom of priests” dealt with sufficiently, in my estimation. I don’t necessarily disagree with all of the authors work here but I simply don’t see it as a sufficient argument against the priesthood of humanity. Is priesthood rightly seen as a hierarchal position of power in the first place?

There are some gems in this book and it is worth your time if you are interested in researching the topic, however it is repetitive and not convincing (to me) in it’s position against the priesthood of humanity.

The Bible and Ecology: Bauckham (Review)