The Bible and Ecology: Bauckham (Review)

Phil Aud
No Comments on The Bible and Ecology: Bauckham (Review)
2 min read

Bauckham has two works (that I am aware of) dealing with eco-theology. I first read “Living With Other Creatures” (reviewed here) which was, admittedly, more in depth than this book, but I much prefer the current book. Unlike “Living With Other Creatures,” Bauckham’s thoughts were organized much better for book format. Both of these books were taken from the author’s lectures (the current from the Sarum Theological Lectures), but the current was edited so well that you would not know it unless you were looking for it.

The book is excellent in it’s call to understand the scriptures in theocentric (God-centered) terms rather than anthropocentric (human centered). The author looks beyond the scope of Genesis 1 and 2 and takes a broad look at various creation passages, particularly Job 38-40, Psalm 104, and Psalm 148 (though Genesis 1 and 2 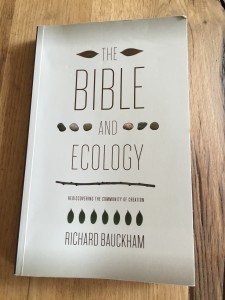 are perhaps underplayed). I found the arguments to be quite compelling though, like his other work, at times pushed too far. My critique is with a certain categorical de-emphasis. Bauckham’s eco-theological work
seems to be a (necessary) reaction to our current ecological crisis. To his credit, he deals well with the theological understanding of ‘dominion’ as dominion among, not above the rest of creation. Humans have, in other words, no hierarchy in the created order. Understanding how the Bible speaks of power, I can buy this. However, it is here that Bauckham begins to reject, or at least de-emphasize, certain human roles within creation; namely the category of priesthood. It seems that priesthood ought to be rethought rather than rejected. After stating that he doesn’t “warm to the idea that humans are the priests of creation” (84), he goes on to talk about the ‘community of creation’ and quotes Aldo Leopold who states:

“We abuse land because we regard it as a commodity belonging to us. When we see the land as a community to which we belong, we may begin to use it with love and respect” (87).

I agree. However, a priest, when fulfilling her role well, also sees the community as a place in which she is a ‘member’ and fulfills her duties out of love and respect for that community. She is a fellow creature. A priest within creation should do no less. All of that to say that it seems that our understanding of priesthood needs reform, not replacing.

Where the book really shines is in it’s final chapter From Alpha To Omega. His writing on the ‘Cosmic Christ’ (from both Colossians and John), and his work on cosmic renewal are astounding. Overall, worth the read if you are interested in the topic.

“Living With Other Creatures” (Bauckham): Review