When my Father died a few months ago I decided, in an effort cope, to do what I often do – grab some books. I wanted to read about the theology of death. My options, unfortunately, were pretty thin. There were a few poems in Malcolm Guite’s “A Word In The Wilderness” (John Davies Death as Birth was particularly helpful); a few pages in Willard’s “Divine Conspiracy”; and a few other odds-and-ends, but really I didn’t have many notes on the subject. I searched around Amazon and realized that it wasn’t just that I didn’t have a lot of theological material on the topic, it’s that there is (to my knowledge) very little writing on death. Just to clarify, there are a boatload of books about grief and suffering and the New Heaven and New earth, just not a lot about the theology of death itself. I decided that someday I will write such a book. I’m currently working on something else but in the meantime I’ve been compiling a research list.

In my very initial attempts at compiling a research list I came across a little book by Richard Beck called “The Slavery Of Death.” Beck, unbeknown to me at the time, has a popular blog where he explores the intersection of theology and psychology called Experimental Theology. I’ve really been trying to focus my reading towards my current research (a lot of creation theology and anthropology) but was intrigued by this book and succumbed to the temptation of clicking Amazon’s 1-click button. Glad I did. 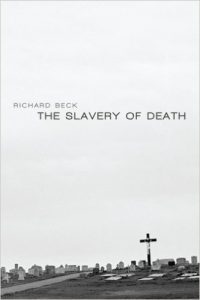 Beck’s work is deeply rooted in Orthodox theology. I have been increasingly drawn to Orthodox theologians as of late and have, rather by accident, realized that they have a good deal to say about death (I began to realize this when reading Zizioulas’ “Being As Communion”). Death, as Beck points out, or better yet – the fear of death – is the basis of most Orthodox theology. Differing from Protestants who believe that sin causes death, the Orthodox believe that death causes sin. Chapter 1 explores this extensively. From the Orthodox point of view “what we have inherited from Adam and Eve is less a moral stain than a mortal condition” (p. 7). This doesn’t mean that we don’t have a moral condition, of course, simply that our moral condition is the result of the death that entered the world because of sin. Sin came first for Adam and Eve and caused death. Ever since, our fear of death has led us into sinful behavior which Jesus wants to deliver us from (Hebrews 2:15 being a key text). This is a big shift for most of us Protestants, but it is a concept worth considering. Even if you can’t go with Beck all the way on this thought there are still fantastic Biblical insights given throughout the book.

Beck explores basic anxiety and neurotic anxiety as two categories through which to understand our fear of death. Basic anxiety “is the anxiety of biological survival” while neurotic anxiety “is characterized by worries, fears, and apprehensions associated with our self-concept, much of which is driven by how we compare ourselves to those in our social world” (p. 28). Neurotic anxiety is what most of us, in the West at least, currently struggle with. Beck goes on to demonstrate how we have removed the reminders of death from our lives in an attempt to sustain the illusion that we are immortal. Beck quotes Arthur McGill who writes that “Americans accomplish this illusion by devoting themselves to expunging from their lives every appearance, every intimation of death…All traces of weakness, debility, ugliness and helplessness must be kept away from every part of a person’s life. The task must be done every single day if such persons really are to convince us that they really do not carry the smell of death within them” (p. 32).

Of course, we still know that we are going to die so what are we to do? We seek to become heroes by making a difference or making our mark on the world. Why? Because by making our mark we can, in a sense, outlive ourselves. But, and this is important, we are not the one’s who define what a hero is; we live within a system which tells us what a hero is. But, and this is important too, there are other systems. Part of the problem comes into play when the vision of two or more  systems clash resulting in violence. At this point Beck writes quite a bit about principalities and powers and idolatry (drawing predominantly on the work of Walter Wink and William Stringfellow).

The last section of the book explores how to get free from these systems by becoming free from the slavery of the fear of death. One of the implications of the hero systems is selfishness. Beck writes:

“this natural impulse toward self-preservation creates a moral bias within our hearts and minds, so that our focus is instinctively directed toward ourselves rather than toward others. Thus, in order to love we need to reverse this arrow, learning to say more often ‘no’ to the self and ‘yes’ to others. The problem here is that this switch is especially hard to make when we are anxious and fearful.” (pp. 59, 60).

How do we become courageous enough to become a selfless person? To “reverse the arrow?” Beck claims that “this courage comes from two places – the formation of a new sort of identity and the formation of a new sort of community” (p. 65). He explores the issue of identity by looking at how Jesus understood his own identity. After that he tackles community. Here Beck brings up such an important thought. As Christians we talk a lot about cross-bearing and self-giving, but is this possible? Can a person really always give of themselves without finally being drained? Beck reminds us that “we aren’t asked to live this sacrificial life all by ourselves…If that’s all that’s occurring, then yes, we’ll soon be empty” (108). But, if I am pouring myself into you, and you to me, than we won’t end up empty. This sounds to me like being invited in to the way of the Trinity.

Beck writes on some potentially controversial subjects but he does so generously. Even if you find yourself disagreeing with some parts of Beck’s work the book is still well worth your time. It is only about 130 pages long but covers a lot of ground. Beck is a great thinker and a very deliberate and clear writer. I look forward to reading more of his work in the days to come. This wasn’t the type of book that I was looking for regarding death, but it is the kind of book that helps provide a good framework for the topic.

Republicans, Democrats, and the 3rd Commandment