It was probably about fifteen years ago that I received a book that significantly influenced my reading. The pastor I worked for at the time was – after twenty-five years of great ministry – transitioning to a new venture. He decided not to take all of his books with him and, after sorting through what he wanted, let his staff have a look through to see if we wanted anything. I think I grabbed two books. One of those books was called Our Father Abraham: Jewish Roots of the Christian Faith by Marvin R. 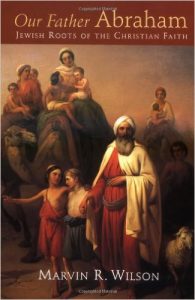 Wilson. It took me a few years to get around to reading it as I recall, but when I finally did it was like my eyes were opened to a new world. Around the same time I read my first Abraham Heschel book called Sabbath. I think Sabbath is most everyone’s first Heschel book.

Since Wilson led me through the wardrobe into a new world, I’ve come to love reading Jewish scholars. I’ve devoured much of Heschel’s writings and then discovered Martin Buber (up to this point I’ve only read “I and Thou” which was intellectually tough but well worth the effort). Then I learned about people like Amy-Jill Levine, Rabbi Jonathan Sacks, Rabbi Joseph Solventchik, Michael Wyschogrod, Robert Alter, Jacob Milgrom, etc. I don’t want to oversell myself here – I still have a lot of reading to do in this world, particularly when it comes to the ancient rabbinical literature (and the fact that I’m writing this blog and haven’t read David Flusser or Nahum Sarna, for example, is shameful). But still, reading Jewish scholars has become a part of my reading discipline and I’m enriched because of it. Here are a few reasons why I think reading theology (and philosophy) from a Jewish perspective is important:

First, I am reminded where I came from. It’s astounding to me how many years the church forgot that Jesus was Jewish. I mean, we knew it I suppose, it just didn’t effect our understanding or interpretation of scripture (or worse, negatively effected it). You know, minor details. Our memory, thankfully, is coming back. To be sure, Christian theology is different than Jewish theology – both Jews and Christians will readily acknowledge that. Still, within that difference Christians need to take a humble approach as we listen to what God is saying and has said to scholars in the Jewish community. Romans 11 comes to mind here:

“do not consider yourself [Gentiles] to be superior to those other branches [Jews]. If you do, consider this: You [Gentiles] do not support the root [Jews], but the root supports you.”
-Romans 11:18

This is applicable in many ways to theology. The Christian story, and thus Christian theology, is rooted in the Jewish story. It is to our demise if forget that. Reading Jewish theologians keeps us grounded in our own story.

Second, and this is deeply connected to the first reason, Jewish scholars help keep me from biased interpretation.  I wonder how many Christians grew up hearing about how different grace and Law were; as if they had nothing to do with each other, were polar opposites? Imagine thinking that the Law was the opposite of grace and freedom and then reading these words of Heschel’s:

“The code of conduct [the Law] is like the score to a musician. Rules, principles, forms may be taught; insight, feeling, the sense of rhythm must come from within.”
-Abraham Heschel (from God In Search of Man)

The Law is like a score to a musician which should lead to insight, feeling, and rhythm? The truth, of course, is that we should have picked this up from the Bible early on. The Psalmist, for example, writes “I rejoice in following your statutes [Law] as one rejoices in great riches” (Psalm 119:14); “I run in the path of your commands [Law], for you have set my heart free” (Ps. 119:32). The Law is compared to great riches and freedom by the Psalmist (not to mention honey, lamps, light, etc.). Text’s like these need to be kept in mind when we read about the Law in the New Testament, but our bias may blind us to them unless, perhaps, we are reminded by the Jewish community (of which Paul was a part!) what the Law was (and is) like from their perspective.

Our understanding of the Law is a pretty base level example though. Enter Amy-Jill Levine. Levine challenges what are often taken as ‘givens’ within current Christian scholarship. I don’t agree with everything that Levine says, but I can’t ignore her either. Reading Levine I am reminded that I need to take less for granted (which means doing harder work), and always keep in mind that my reading and interpretation may, even if inadvertently, be tainted with a bias that hurts not only my reading but the Jewish community.

I mentioned that I don’t always agree with Levine; that actually ties into the third thing that I’ve learned from the Jewish community: how to disagree. I have a friend who is a Hebrew ninja. She currently teaches seminary students. Before that, however, she trained Jewish students in Biblical Hebrew to prepare them for the Rabbinate. She once told me that her Jewish students knew how to argue better. (They also knew the church Father’s better, but that is for another post). This was a part of their learning process. Of course, Christians argue too, but not usually in the same way. The point my friend was making was that her Jewish students argued as a way of learning. Christians, generally speaking, tend to argue to win.* The difference, I think, has to do with fear. Christians are often afraid of entertaining a new thought** and wrestling it through with others. We’re also afraid – again, generally speaking – of allowing theological tension to exist. This is because we tend to think like Greeks and not like Hebrews. More on that in the next post. When I read Jewish scholars I’m reminded that there is more than one way to think, and that need not lead us to a posture of suspicion; it can lead, instead, to joy.

Finally, and this is tied in with the third point, Jews are more playful with scripture. Unfortunately, I don’t think the words playful and scripture go together for many Christians (Robert Farrar Capon is a fun exception). But why not? Isn’t there something wonderful about Midrash? (Midrash is essentially a reading between the lines of scripture – filling in the blanks with story). Isn’t there something joyful about how the Masoretes played with the size of the letters of the Shema (Deuteronomy 6:4) when they copied it so that the reader would see the word “witness” buried in the text? I’m not saying that everything has to be Midrash, but I do think it has it’s place.*** I witnessed the beauty of Midrash recently in Rabbi Jonathan Sack’s wonderful book “Not In God’s Name.” He weaved interpretation, midrash, and current events together like a master, leaving the reader incredibly challenged by God’s word.

This is just a starting place on my reading journey. I Would love to hear some of what you have learned/are learning from reading Jewish scholars and some books that you recommend. Here are a few books that I love by some of the aforementioned authors:

*Obviously there are exceptions.

**When I say “new thought” I don’t mean making something up. I mean a new thought to them. There are often times when a person will read something that they had never thought of and subsequently be scared of this “new doctrine,” only to find out that the church has been talking about it for 2000 years.

***I love that Brian Zahnd did a Midrash series at his church. It was fantastic.

When Your Scammer Becomes Your Brother