Phil Aud
No Comments on 3 Reasons Fiction Is Becoming More Important To me
6 min read
“Reading is a technology for perspective-taking.”
-Steven Pinker

Confession: I haven’t read many novels. I read geeky stuff mostly – theology, a bit of philosophy, that kind of thing. Several years back, though, I met with a fantastic preacher named Steven Kennedy who opened a new literary door for me. Steve was the 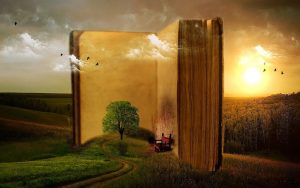 Chapel Pastor at the College I attended and is a brilliant communicator. Usually – during my college days at least – Steve would sit on a stool and preach very conversationally. He often cried when he preached. We did too. I guess it was because there was something very real, for lack of a better word, about the things he said. A note of truth and beauty underscored his sermons. This beat the synth that underscored some of the other preachers that spoke. I would know, I played the keyboard.

I remember meeting up with Steve to talk about my then new recording, Come May. He was interviewing me for our denomination’s magazine which was called The Testimony in those days. I was anxious to ask him what he had been reading. Part of me, I suppose, wanted to prove that since my college days I had been reading worthy books. ‘So, what have you been reading? The new Wright book? Read any Newbigin lately?’ With nothing to prove he told me he hadn’t been reading any of the books I had mentioned. He told me instead that he’d been reading some good novels. This wasn’t what I was expecting. I think he knew this much. In the course of our conversation he said, “People ask me all the time why I read fiction. My answer is always the same: because it’s true.” Because it’s true. I went away with a different list of books in the “to read” pile than I had expected. From Kennedy I learned about people like Wendell Berry and Anne Tyler, for example. (Steve, if you somehow stumble upon my little blog someday, know that I bought and read most of the books you mentioned and am grateful).

The majority of my reading is still theological, but in recent years I’ve also been mixing in some fiction as well. Not much to brag about at this point (though the same could be said for my theology reading, perhaps), but I’m coming to find this genres to be of great importance for a few reasons.

First, I’ve come to realize that Steve hit the nail on the head; good fiction is true. I marvel at the mind of a good novelist. How do they reveal the truth of the mundane so well? It’s rarely the epic moments of the story that leave me with tear stains on my cheeks. Instead, it’s the glory of the ordinary moment made holy by a sacred act like the blessing pronounced by a pastor in Marilynne Robinson’s Gilead. Speaking of Robinson – and this meant with no disrespect to her fine scholarship – but I find more truth in her novels than in her scholarly essays. They are both good but her novels challenge me long after I’m done reading them.

“One great novel, read slowly enough, with some pondering and with thoughtful notes taken and stored…will generate treasures.” (42)
-Cornelius Plantinga

Notice carefully what he says: slowly read. In listening to sermons, and I listen to a lot of sermons, I’m beginning to notice the difference between an illustration that has been found on a website and one that has been found in one’s own reading or life. When you slowly read something you digest it. It works on you in some invisible way. Comparatively, the illustration found on a website can sound canned. Why? For one thing, it hasn’t done it’s work on the preacher. Plantinga notes that while it is possible to find an illustration that works from a website, “the good ones have all been used by other preachers in the hunt so that the chance of finding a really fresh one is small. In any case, none of them rose naturally to the preacher’s attention within her own observation of life or her own program of reading, so none has been discovered and then owned by the preacher herself.” This is not to say that it’s wrong to find an illustration from somewhere else, just that it’s not the same as using one that has done it’s work one you personally. There’s a difference.

Third, fiction helps you see through new eyes and teaches you how to listen better. I plan to write a separate post on how Goldfinch did this for me recently, but I’ll just comment more generally for now. Steven Pinker writes that “realistic fiction…may expand readers’ circle of empathy by seducing them into thinking and feeling like people very different from themselves.” Story, far more than any other genre, has an ability to slowly allow you to see the world through the eyes of someone very different from you. In other words, it increases your capacity for empathy. Ever notice that one of Jesus’ classic sayings was, “Let those who have eyes to see, see,” and that he was constantly healing eyes? Jesus – in word and deed – was teaching us that there is more than one way to see in the world. Miracles help, but so do stories (hence Jesus teaching style). Story draws you in and gives you a new set of eyes. It helps you to become more empathetic towards people who are different. I’ve experienced this while reading good novels. Thanks Steve.

What are some of your favorite novels?

If you are a preacher or hope to be one some day, I highly recommend the following two books:

Reading For Preaching by Cornelius Plantinga 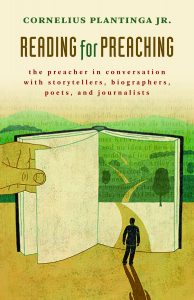 Reading For The Common Good by C. Christopher Smith (which I’ve reviewed this book here). 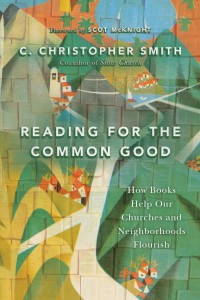