I’m not big on reformed theology. I’m not big on apologetics, either. Still, I really like Tim Keller. I don’t agree with everything he says, but there is much to learn from this seasoned pastor and author. 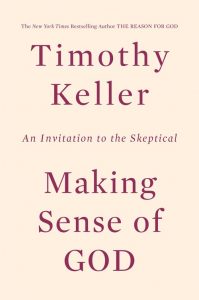 Making Sense of God is an apologetic (hence the subtitle An Invitation to the Skeptical). Like I said, I’m not big on apologetics, but Keller’s approach is very generous and – like his other books – a pleasure to read. Whatever else one can argue about Keller, he’s a fantastic writer.

As to the actual content of this work I have three review comments. First, Keller is well researched. Sixty-eight pages of endnotes points to this fact. He references great scholars, lays out his material in a very clear and concise manner (again, great writing), and engages many current issues in a way that is easy to read.

Second, this book is not necessarily for every skeptic. I’ve read some who critiqued Keller’s The Reason For God for being overly simplistic in it’s content. The irony is that I know other people who thought it was a very difficult read. I believe that we can look at the different reactions and conclude that Keller is writing for a relatively specific audience. I would categorize that audience as being well to very well educated, but not necessarily highly educated in the specific field he is writing about. In other words, they might be doctors or lawyers, but probably not philosophers. This is not a dissertation or an attempt to make a mark in the philosophical world but is rather a work geared towards those who are well educated but have taken much of their worldview for granted. When I said earlier that his apologetic is generous, I mean that it is pastoral. He is not (thank God) like the in-your-face want-to-be apologists that post videos on Facebook. He’s a New York city pastor who is dealing, conversationally, with issues that matter to people (or the sub-issues which they haven’t yet thought through). In my opinion, he does this really well.

Third, if you are familiar with Keller’s previous work you will recognize a lot of the material in this book. This is not to say that this book is simply a rehash of previous books, but there are traces of it there. This isn’t necessarily negative, though, since all of the thoughts fit well in the overall structure, but it’s noticeable.

Overall I enjoyed this book and am grateful for Keller’s wise pastoral voice in our day. 4 stars.

Do Not Be Afraid